The life of the Castle

ART IN THE CASTLE 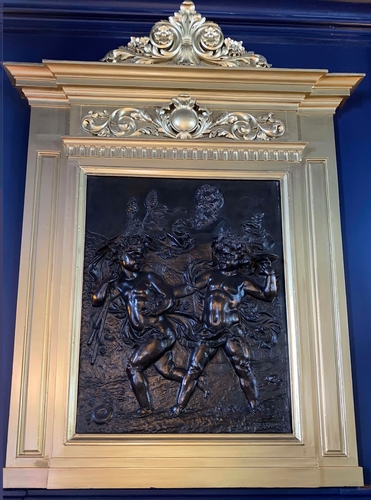 The strange fate of Charles-Auguste Lebourg

What a curious fate for the author of the work we present to you this month. Born in 1829 in Nantes to a father who was a bookseller, Charles-Auguste Lebourg was a student of the Nantes sculptor Amédée Ménard, before joining the workshop of François Rude. As an adult, he divided his time between his native city, where he had his own studio, and the capital. Although some of his works are now known and recognized throughout the world, he did not achieve the fame he deserved during his lifetime. He died in poverty in Paris in 1906, leaving behind him a real heritage, a fragment of which can be discovered in the heart of our 5-star hotel, a stone's throw from Nantes.

An ornamental sculptor, Charles-Auguste Lebourg was a specialist in working with bronze, as in the two monumental frescoes that adorn the Salon des Épices adjacent to the Château's gastronomic restaurant and the corridor that leads to our Spa. He is known for having created numerous busts and statues, including five fountains in Nantes, a hundred in Paris and many others now scattered throughout the world.

The artist has notably worked on the decoration of prestigious places such as the Louvre Palace, the Paris City Hall, the Trinity Church or the Fontainebleau Castle. In Nantes, his works can be seen on the Place des Enfants Nantais (equestrian statue of Joan of Arc), in the Jardin des Plantes and in the Nantes Museum of Art. His most famous work, The Four Caryatids of the Wallace Fountain (1872), is even considered today as a symbol of the city of Paris. A prestigious CV that earned him several distinctions, but not enough at the time to achieve the notoriety he deserved.

By chance, you can discover some of his work in Maubreuil. These sculptures originally belonged to the Château de Rignoux, in Vigneux de Bretagne, near Nantes. Spotted in extremis when it was about to be sold by an antique dealer, this work finally found its place in an original overmantel of the Château de Maubreuil, whose size, as if it were written, corresponded perfectly to it. A story that reminds us of a famous princess...

From Septembre... Find vitality and well-being at the Château de Maubreuil !   “Good physical condition is the number one prerequisite for happiness.” - Joseph Pilates -   Take advantage of the exceptional setting of the Château...