News about the Chateau de Maubreuil

The life of the Chateau

ART IN THE CASTLE 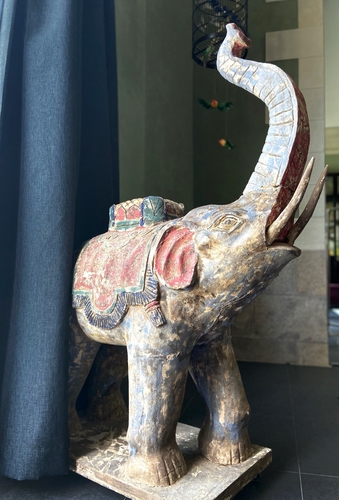 The Asian elephant inspires power and serenity at the Château

Located in the outbuildings of the Château, the 100m2 Salon Tropical offers all the flexibility necessary for the success of any type of event.  Its exotic decorations, including two sculptures representing an Asian elephant, give the room an elegant atmosphere. This month, we invite you to discover the Asian elephant, an animal revered in the East for its power and serenity.

The Asian elephant is highly revered in many Asian cultures. It is found in many cults, myths and legends. Respected as the embodiment of power and serenity, the Asian elephant also symbolizes peace, prosperity and mental strength.

The elephant, also known as a pachyderm, is often considered a royal and cosmic animal. It is one of the main figures of Hinduism and Buddhism, two religions that have a large number of followers around the world, most of them in Asia.

In Hinduism, the Asian elephant is represented as Ganesh, a human being with an elephant head, god of wisdom and knowledge. As for the Buddhists, the elephant is a totem symbolizing peace, prosperity and mental strength, the instrument of action and blessing from heaven.

It was while wandering the streets of Delhi, India, that the owner of Château de Maubreuil fell in admiration of two wooden sculptures of Asian elephants carved and painted by hand by an artisan. So he decided to bring them back to France, for his 5 star hotel, where the two Asian elephants have perfectly found their place in the Tropical Room, offering to this place a feeling of peace and calm.

Your satisfaction is our reward

Meeting with Clément, the new head chef at Château de Maubreuil At 31 years old, Clément has already worked for several renowned establishments. After six years in Paris and an experience abroad, Clément returned to his native city,...